Rafik Hariri’s legacy can be traced back to this once small city, on the Mediterranean, with its plentiful orange orchards and long history. He was born there, and his siblings and distant family are still living in the city. Rafik Hariri helped rebuild and renovated Saida’s infrastructure after the 1982 Israeli invasion, building roads, school, and various projects.
Thus, the two Sunni MPs of the city have always had a symbolic importance. In 2009, for the first time since the formation of the Future Movement (FM) party,  it was able to win both seats. Unfortunately, in 2018 FM failed to repeat this feat and their old adversary Oussam Saad took the second seat in the place of PM Fouad Sinioura.
It is worthy to note that in 2009 Mrs. Hariri won with 25,500 votes to Oussam Saad’s 13,500. Indeed, MP Hariri received almost 64% of the total vote, with a record setting 68% participation, the highest in Lebanon. In 2018 Future Movement numbers fell in Saida to 15,308 against 10,255 for Oussam’s, with only a 54% participation!

So what happened? In this deep analysis of the results, I will try to find patterns in the numbers, and draw some conclusions. I will tackle this in two sections: turnout and voting patterns! This analysis has been made possible with the help of NDI, with whom i have been working on a data liberation project, to transform the Ministry of Interior official detailed PDF results into machine readable excel, and add sect and gender information. To learn more about this project please use this link. 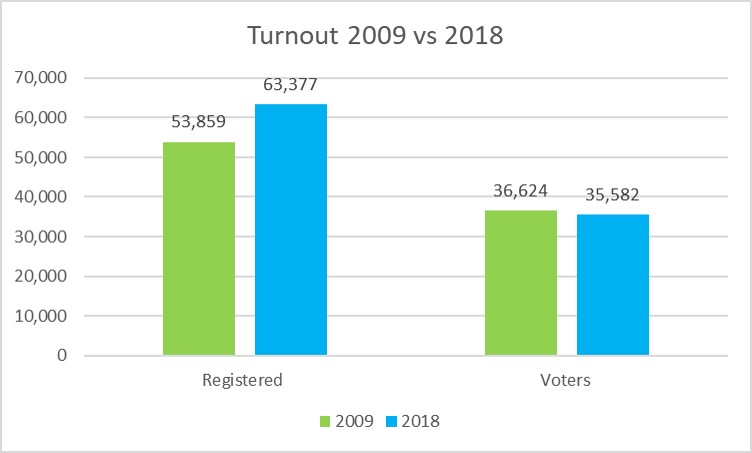 It is clear that turnout fell significantly, especially among Sunni! Based on the a preliminary analysis of the numbers (link) this trend among Sunni’s seems widespread to most districts with Sunni majorities (Beirut 2, Tripoli, …) Indeed, during the last 9 years 10,000 new voters registered in Saida, with a majority of Sunni, however less people voted in absolute term in 2018 than in 2009
Even more significant, there are more female than male voters in Lebanon. Almost 53% (according to UNDP). Additionally, in relative numbers, women turnout is higher than men’s, yet in Saida, Sunni women turnout was lower than men, at odds with Shia and Christian women! 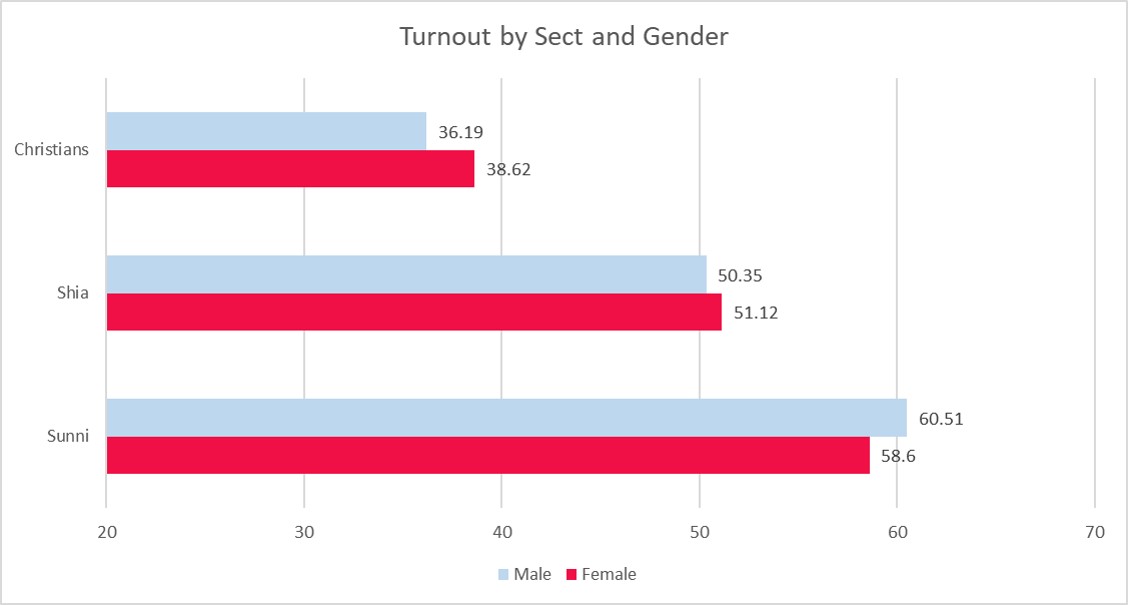 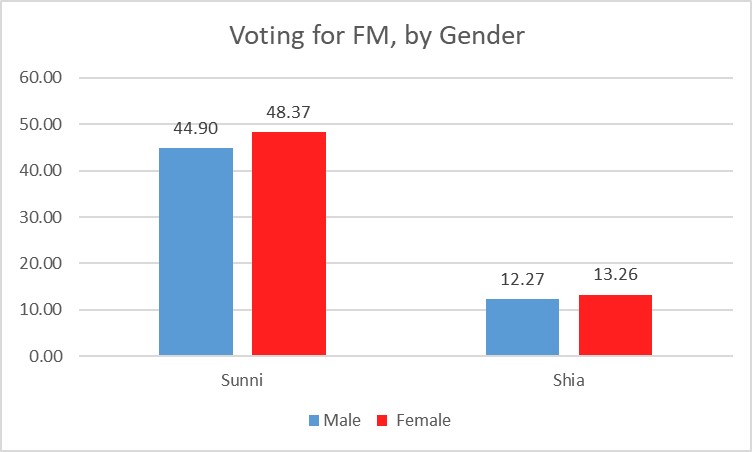 Women turnout, as previously mentioned, was lower than men’s. Even though the head of FM list in the district was a women, but that did not raise the turnout.
Although, Sunni women voted less than men did, but they supported MP Bahiaa at a higher percentage than men. (48.37% of women, voted for MP Hariri, as opposed to 44.90% of men)
This are very important data points, and once the rest of the districts are analyzed, it will be possible to draw correlation between several variables. For example is women turnout affected by the presence of  strong women candidates, and do women vote more for women candidates?

Second: voting patterns:
I believe that Saida’s voting patterns might hold true for most of the other districts, and i will try to show that in future analysis. Indeed, Shia voters voted in mass and with a very high adherence to party instructions. Meanwhile Sunni voters were lethargic, and their vote was split and dispersed among many lists (see Beirut II as a perfect example), severely lowering its effectiveness. On the other hand, the Christian voters were more fired up, and more disciplined, but divided into different parties (FPM, LF, …) this sometimes played against them, in Jezzine for example.
Thus in Saida, Sunni turnout fell heavily, and from a 64% support to FM in 2009, to just 46% in 2018. On the other hand, shiaa voters in Saida adhered strongly to their party’s instruction and voted, cross confessionally, to their sunni ally at a very high 73% rate. This trend of shia voters, is especially salient in the Southern and Baalbek districts reaching high 80 or even 90% adherence. In Jezzine too this was even more evident, shia voted at a dizzying 92% for their Christian ally Azzar. 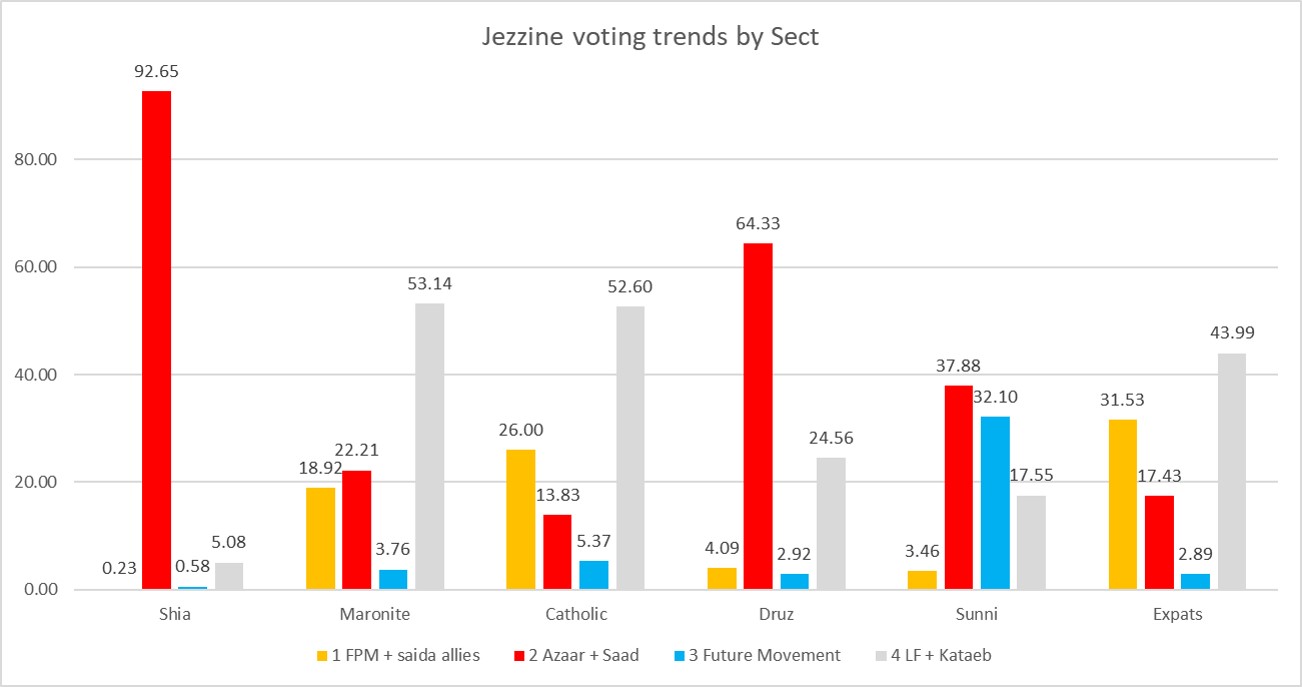 Lastly, preparation, training, and information, pay and pay very well. Saida suffered of one of the highest rates of invalidated ballots, at 3.14%. Meanwhile, in Jezzine it was half of that, at 1.55%. With the Ministry of Interior being busy with the overall organization of the election, it fell to the parties and NGOs to train their people and their supporters on how to vote and how to help voters during the process.
Thus, certain parties (Lebanese Forces come to mind) were able to prepare their electoral machine, train their people and observers, inform their electors, and they reaped the benefits, by doubling the number of their MPs. For example, their regions of Bcharreh had the lowest rate of invalid ballots at 1.71%. Others did not, and the invalid ballots rate in their strongholds was fairly high, robbing them of precious seats. For more analysis on the invalid ballots and turnout, check this link.
Finally, it is worthy to note that despite rampant sectarianism and the ugly inflammatory rhetoric that preceded the elections, there was small but significant cross-sectarian voting. 12% of Saida’s shia voted forMrs. Bahiaa Hariri and 34% of Christians, and she received 1,100 Christian votes for Jezzine. I firmly believe that political parties, focusing on issues politics (waste management’s, electricity, and environment) with a clear and organized agenda can make significant headway in the Lebanese political arena.
This leads us to the a very important question on why the civil society wave started in 2016 with Beirut Madinati receiving more than 35% of the vote in Beirut’s municipal elections, did not make a significant breakthrough in the parliamentary elections, winning only one seat. A question that I will deal with in depth in the next several articles.

Will Prime Minister Hassan Diab be another Hoss or a Mikati?